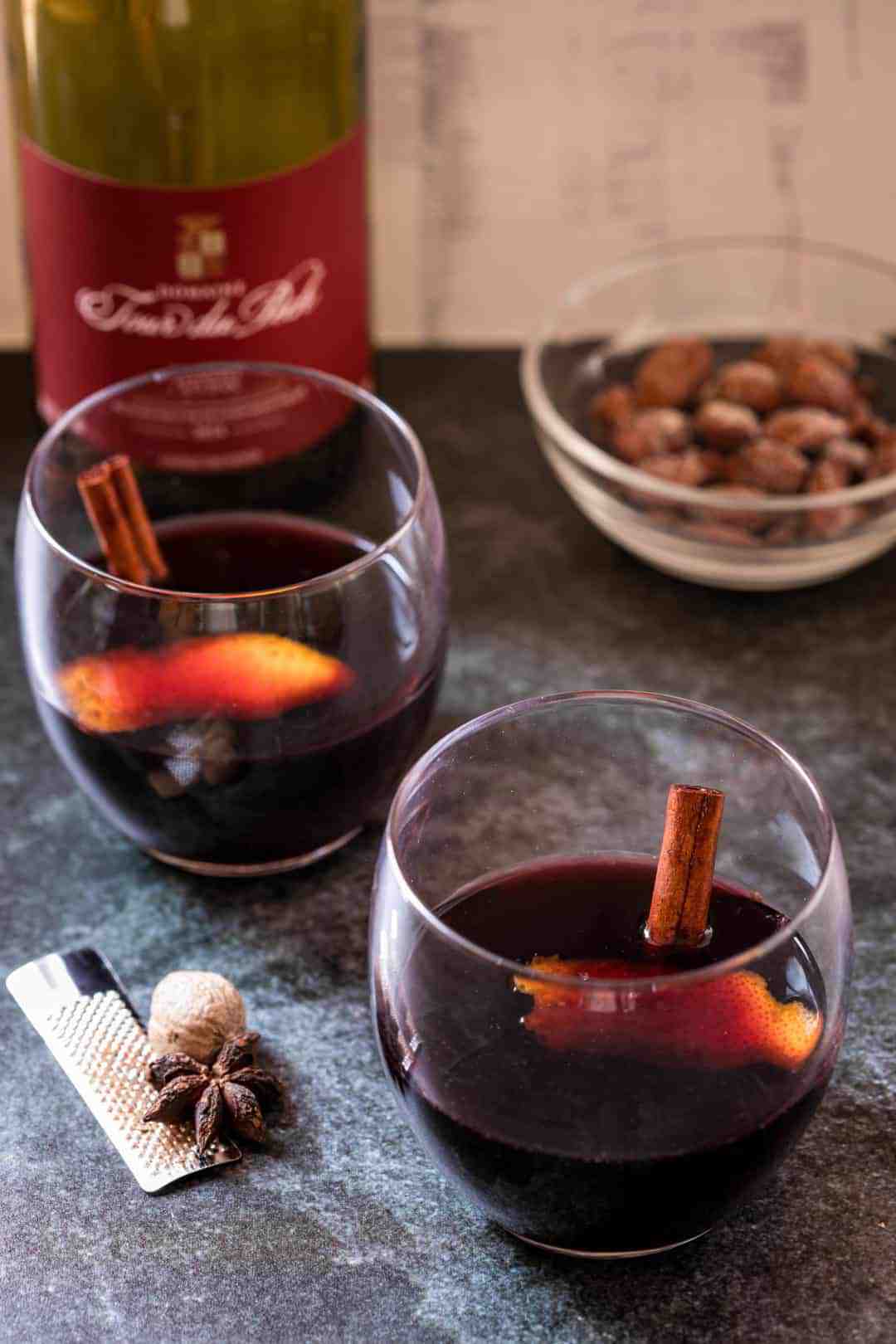 Vin Chaud is one of my favorite winter traditions here in Paris. Starting in November, Christmas markets (Marchés de Noel) pop up all over the city with vendors offering hand-made trinkets, local food specialities, hot chocolate, and of course, vin chaud. You curl your hands around your warm cup, sip, and wander through a wonderland of winter lights and tiny treasures. But lucky for me, the vin chaud offerings do not end with the closing of the Marchés de Noel at the end of December. You can still find vin chaud in bistros and pop-up booths near popular winter activities. Over the weekend, we sipped some in the adorable bubble bar on the first floor of the Eiffel Tower, toasting the new year.

Back in the States, I frequently made mulled wine as a winter party drink. My go-to recipe, this one from Ina Garten, cuts the alcohol content quite a bit by adding a good amount of apple cider before steeping the wine with winter spices. Traditional French vin chaud recipes, however, do not include cider or any other liquid besides wine, except perhaps a squeeze of lemon or orange juice. Instead, sugar is added to a fruity red wine along with a combination of spices like cinnamon and nutmeg. The mixture is heated, strained, and then served with a twist of orange zest (if you’re fancy). Particularly delicious when sipped while walking the light-filled winter streets of Paris, but lovely in your living room beside a crackling fire as well.

How do you make Vin Chaud?

Wash 1 orange and 1 lemon, especially if they are not organic. Peel a few strips off the orange, avoiding the white pith, and reserve for serving. Then slice orange into 1/2 inch rounds. Peel the lemon in long strips, avoiding the white pith. Combine orange slices, lemon peel, a bottle of red wine, 1/2 cup brown sugar, 1 cinnamon stick, 1 star anise pod, a 1-inch piece of peeled ginger, and 1/8 teaspoon freshly ground nutmeg in a large saucepan and bring just to a simmer over medium heat. Stir until sugar dissolves.

Turn down the heat to low and cook for 20 minutes to let the spices infuse. Make sure the wine does not boil. Boiling will negatively affect the flavor and cause some of the alcohol to evaporate. There should be small bubbles on the surface and some curls of steam rising from the liquid. After 20 minutes, strain wine through a fine-meshed strainer into a clean saucepan or remove the orange slices, star anise, cinnamon, and ginger with a slotted spoon. Keep over a very low heat. Serve warm wine with an orange twist and cinnamon stick in each glass.

What wine should I use for mulled wine?

The best wine to use for vin chaud or mulled wine is a fruity red wine, such as a Pinot Noir or a Merlot. In France, wines from Bourgogne work well. The tannins in a very dry red wine (like a Cabernet Sauvignon) may become bitter when the wine is simmered. You don’t need to spend a lot of money on this bottle of wine, but you should buy something that you would drink by itself. And of course, tell your neighborhood wine vendor what you are looking for—mine pointed me to a very reasonably-priced Merlot I never would have seen had I not asked for a recommendation.

What spices and fruits should I use to make Vin Chaud?

Different recipes call for different types of citrus—both lemon and orange are popular, though not lime.  Typically I wouldn’t worry about choosing organic with a fruit that you will peel before eating, but since you will use the zest of your citrus, choosing organic to avoid pesticides is a good idea. At the very least, wash your citrus well before peeling or slicing.

Spices are also very flexible. Most recipes call for some combination of cinnamon, star anise, cloves, and nutmeg, but you can use any combination of those together.

Yes, it is. Because you are not boiling the wine or cooking it for a long time, alcohol does not evaporate off. If you want to create a version that is not quite as alcoholic, try the mulled wine approach of adding some apple cider to your vin chaud.

In 2nd century Rome, wine seasoned with spices and then heated was first recorded as a drink. It then made its way through Europe thanks to those ambitious Roman conquerers. Today, in the United Kingdom, mulled wine and mulled cider are popular Christmas drinks. In German-speaking countries, vin chaud is referred to as Glühwein and often includes vanilla beans in its recipe. Some say its name, which translates as “Glow Wine” comes from the warm glow in your cheeks when you drink some. Others claim it was so named for the glowing red irons that were used to heat the wine hundreds of years ago.

Nordic countries drink Glögg, which is similar to the other mulled wines though sometimes also includes vodka, whisky, brandy, or rum. And other similar versions exist through many other countries across the globe. It seems that warm spiced wine is a winner everywhere.

If you like this recipe, you may be interested in more of my France-inspired recipes. Check out:

Molly Madigan Pisula is a personal chef dedicated to building connection through food. From everyday meals to entertaining, Molly's easy, elegant recipes help you grow the cooking confidence you need to nourish your people. 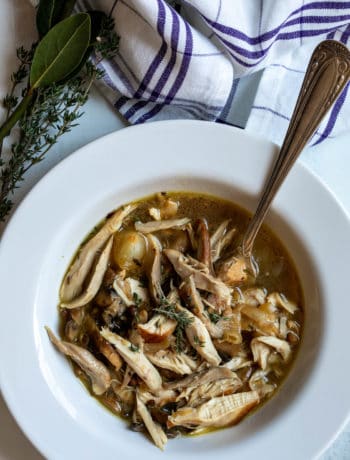 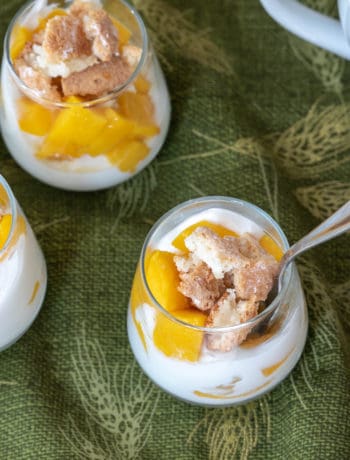 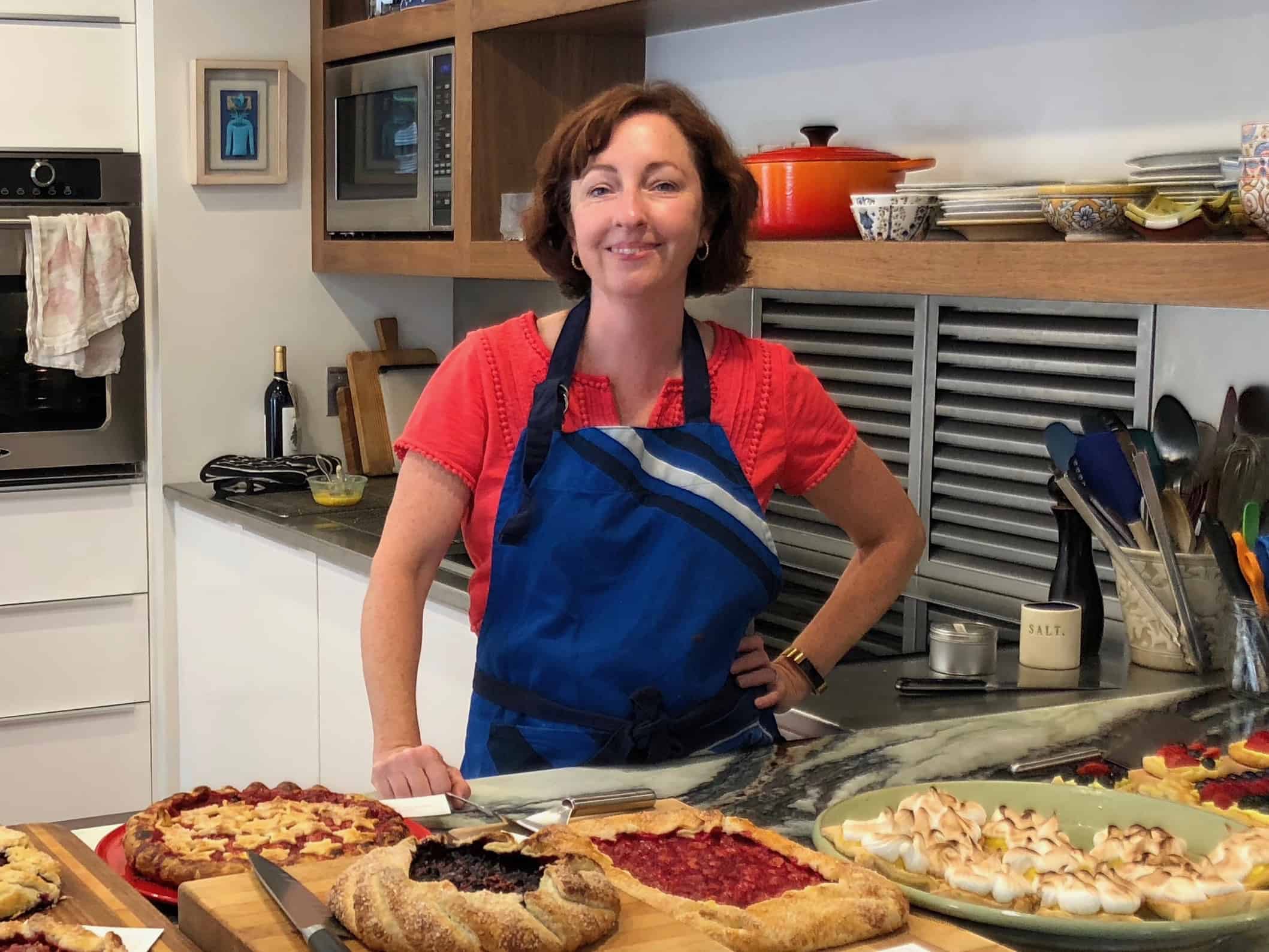 Cooking healthy(ish) meals with seasonal ingredients is my passion. Join me as I explore Paris and develop recipes inspired by French cuisine, both for everyday cooking and entertaining. Read More... 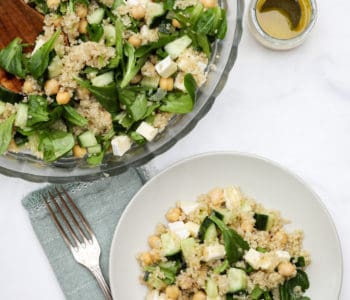 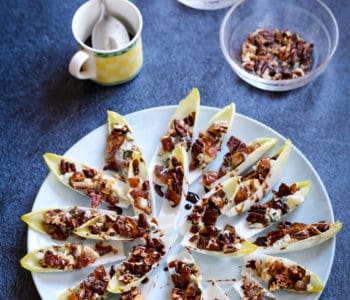 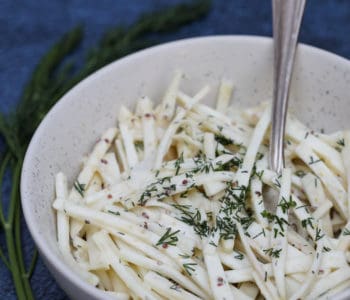 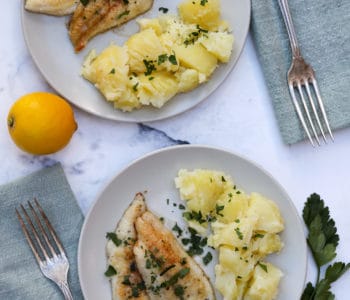 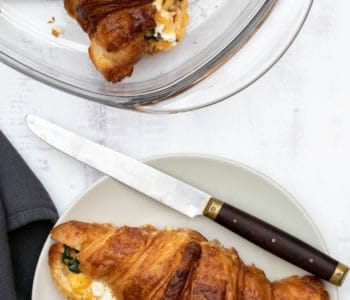 Vanilla Bean Cuisine is a participant in the Amazon Services LLC Associates Program, an affiliate advertising program designed to provide a means for sites to earn advertising fees by advertising and linking to Amazon.com. That means if you purchase an item through my link, I will receive an affiliate commission at no extra cost to you. All opinions remain my own.